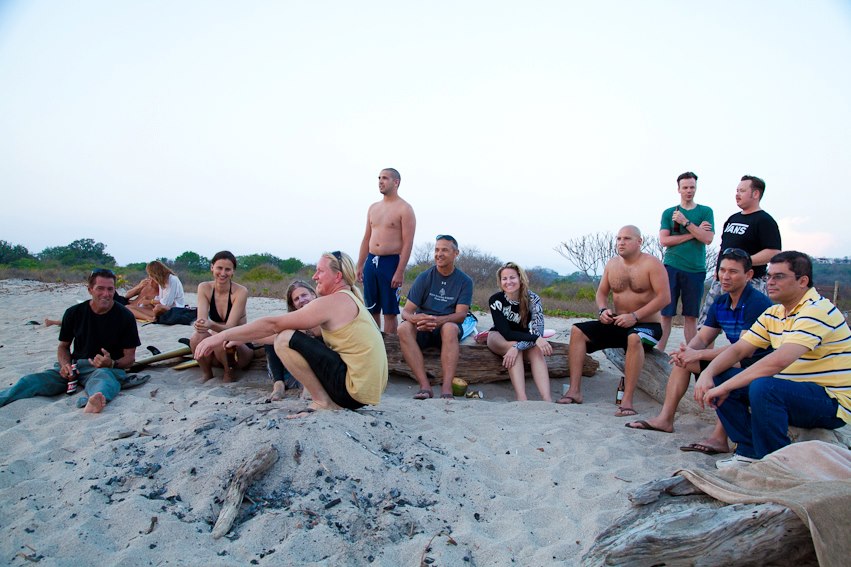 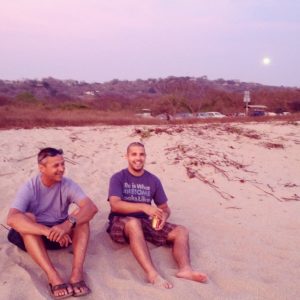 After surgery, and as Kenny began to regain the use of his left side, friends and family started to ask “so what do you want to do when you get out of the hospital?” It is still unclear when or if Kenny will be able to return to work but in the meantime friends and family are rallying to help take advantage of “down times” between treatments and chemo therapy. One of the first wishes on Kenny’s bucket list was to return to Nosara, Costa Rica, where he lived and worked several years ago.

Within days after his first Gamma Knife radiosurgery procedure and before the start of a new chemo drug, Kenny took advantage of a treatment-free week to travel to Costa Rica. Air travel is still a little challenging for Kenny due to memory issues and difficulty in maintaining mental focus when faced with complex to semi complex issues and decisions. As anyone who has recently negotiated international air travel knows; airport signage, security and immigration issues can confuse even the most accomplished traveler. Additionally, there is some risk to Kenny when traveling by air so he has to take medication to prevent brain swelling. To help with these challenges, to satisfy a desire for some father-son bonding time, and to provide for a Costa Rica chauffer (Kenny still can’t drive), dear old dad accompanied Kenny on the trip.

After an all-night flight we landed in Liberia, CR about 11 AM. We rented a car and started the 2.5 hour drive to Guionnes Beach near Nosara on the Pacific Coast of Costa Rica. For those of you who have made this trip you will remember the last 10 to 15 miles of dusty, bumpy dirt road. While the drive is at times slow and tedious it is well worth it once you arrive. We arrived at the Gilded Iguana (www.thegildediguana.com) in the afternoon and after check-in we proceeded immediately to the pool to cool off. The Iguana is a hotel and restaurant run by two very special people, Matt and Joellen. Kenny worked for Matt and Joellen when he was in the CR several years ago and together with other former coworkers and friends, they arranged for a fantastic week. It turned out to be a reunion of very dear friends from all over the world. In addition to Matt (Australia) and Joellen (Canada) the group included Rachel from Virginia and Ben from London, Nick and Nicki from Florida and Dino and his wife from Norway.

Guionnes Beach is a bit of a surfing mecca, a very long beach break that always seems to have waves. At times the waves come in with such frequency it is difficult for experienced surfers, not to mention beginners, to paddle out. Surfing has always been one of Kenny’s favorite pastimes and he was surfing regularly in Del Mar right up until the time he was diagnosed in September of 2012. After surgery he moved to his mom and step-father’s home in Newport Beach. While he has tried to surf a couple of times in Newport since his surgery, he had yet to actually stand up on a wave. He has been frustrated with lingering motor and balance deficits on his left side so he just hasn’t been able to pop up on his board as he did prior to surgery. On the morning of our first full day in Costa Rica Kenny went surfing with Nick, Ben and Rachel. It was one of those days when the waves were coming in one after the other with very few breaks making it difficult to paddle out. After several attempts Kenny finally caught a decent wave, stood up and rode it all the way in. It was a huge milestone in Kenny’s comeback from surgery, it brought tears to dad’s eyes, and it provided us all with a reason to celebrate that night over drinks and dinner.

After a couple of days of surfing Matt arranged for a boys fishing trip. A friend of Matt’s owned a boat and agreed to take us all out for a day of fishing. It was a very warm and clear day and the view of the coast from the boat was fantastic. The waves were pretty big that day so we could see the whitewater from breaking waves all up and down the coast. It was a beautiful day to be on the water and even though the group only landed two fish we had a great time.

The remainder of the week was spent surfing, relaxing around the pool, reminiscing and breaking bread with a very special group of people. It was a great week for which Kenny and his dad will be forever grateful. Thanks to all who made this week possible.

The week Kenny got home, he started on the new chemo drug, Avastin. Avastin is administered via IV every 2 weeks. We are hopeful this (along with the Gamma Knife procedure) will keep the tumor stable, if not shrink it even more. Kenny and his family thank you for following our journey and supporting us every step of the way.